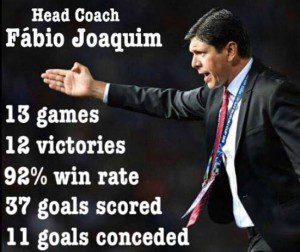 Our Coach Fábio Maciel has won the League in Asia with
an incredible win rate of 92%, winning 12 games of 13 disputed.
He came to Asia in the middle of the season and since them
he changed the way football in the team because when he arrived
they were in the half of the table and when the championship
finished they were the champions.

“It was the third season of Fábio in Asia as an Head Coach,
he has worked in the National Team of East Timor and in Dibba Al-Hisn,
but was this season that he did an excellent job with this great
win rate and championship winning.
The club has renewed his contact for more 2 year and we believe that
the nexts season will be even better for him and mainly
for the team, making another great job for they can win more trophies”
-says Valdir Sousa, President of Etminan Brazil