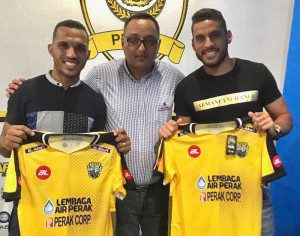 Our players Leandro(Midfielder) and Gilmar (Striker) are back to Asia
to play this season after have done a great job in Brazil.
Gilmar was playing in SER Caxias the Gauchao Championship,
the team have played a great championship and our striker was
one of the top scorers and bests strikers.
Leandro played fot Luverdense in the Serie B of Brazil Championship,
the team have reached a good position in the table and our player
helped the team to make a good championship.

“It is very good to Etminan Brazil to have those great players in Asia
playing together for they cooperate with each other, they have already
played in Asia and both of them know the dificult and the quality of Asian
football, but I know that they are ready and focused to help the team
to do a great season and to reach their goals.”
says Valdir Sousa, President of Etminan Brazil