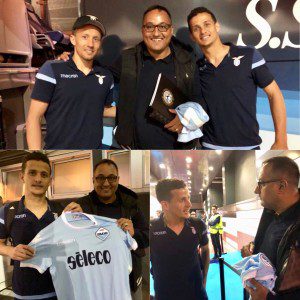 Recently, Etminan Brazil have been in Italy to watch the great game of
Serie A TIM between Udinese and Lazio.
The game was at Friuli Stadium and ended in a Lazio’s victory for 1-2.
After the game our President, Valdir Sousa, met the Brazilian players of Lazio’s Team,
Lucas Leiva and Luiz Felipe and received a jersey as a gift.

“It was a great experience watching this game of the excellent and recognized Italian football between those two giants of Italy and even better could receive a Lazio’s Jersey form Luiz Felipe and meet Lucas Leiva too.
We hope that both teams could do a great end of Serie A TIM, could reach their goals for this season
and that both players, Lucas and Luiz, have much success in Italy.”
-says Valdir Sousa, President of Etminan Brazil